So, it's been a almost a month since I did the last update, I've been very busy with Major Project, which is what I am now here to talk about!

The journey with 'ECHOES' has been an awesome project, even though we are all glad to see the back of it now, haha. It allowed us to work together to create something that we couldn't even make a fraction of by ourselves, and thanks to Ruth's Directing and her and Joe's Unity skills, we've actually made a game! It allowed me to animate a vast array of different creatures, which was great for my personal taste and my showreel. I also enjoyed doing some game rigging for the 'Bark Basher' character, and animating his complex anatomy was a challenge, but good to put me out of my comfort zone. 'ECHOES' has definitely improved me as an animator overall, and made me realize I have a fondness for creature animation.

I took over a shot and a walk cycle for Rachel Williams quite late in the project, but surprisingly I enjoyed animating in a tighter time frame. I wish I could have made the 'Shot_18' animation a bit better, as I was quite limited by the trunk following the monkey, but having to do a limited animation like that was a good challenge. The walk cycle was enjoyable to do as it was going back to the creature animation I like to do, and I have never animated a huge creature like an Elephant before, which added more diversity to my animations. Overall I wish I could have improved them a bit before having to hand them over to Rachel, but I was happy with how the walk cycle turned out!

I had been looking at the Tiny rig on Creative Crash for awhile now, so it was a rig I was keen to try for my personal project this year. I would have used the Nico rig as I think he's awesome, but as I already had a lot of creature animation in my reel, I wanted to do a body mechanic piece with a 2-legged character, which Tiny was perfect for.

As for the rig, it produced really nice animation, although it was a bit daunting at first to get used to all of the controls. I also noticed that you could break his hands very easily while attempting to get to know what moves what, and his wrists would twist when the elbow was pulled or had high values on them. The rig file was also huge, so that if I tried to delete him from the scene it would crash Maya, so he could be a little awkward to animate with and move, but he was still a good rig.

As for the animation, I was quite satisfied with it, but I would have liked to have improved it more. It was also annoying that his teeth didn't render! GGRR. Oh well. Again, the sequence was definitely another challenge to completed the jumps and slides, as was difficult at first, but again it was enjoyable to animate and I liked the challenge.

To conclude, I think I have challenged myself a bit with this major project, and wanted to do animations that I hadn't done before. I discovered that I like creature animation above character animation and would like to pursue this, and I enjoy working to a shorter time limit, a challenge which I thinks improves my skill. Overall I think this Major Project, while long (as sometimes soul destroying...), has been darn good, and I have enjoyed animating it. :)

So today we had our first submittal for Major Project, where we were asked to hand-in everything we have done so far to show the tutors how far along we are, and for a last chance at some in-depth written feedback from them before deadline. So this will be a good chance to show the work I have done so far. Today I will just post the update on my personal work, and then the game animations tomorrow.

Starting with my personal Project, there was a bit of a change to what I am doing, as I am no longer doing the Dinosaur composite that I posted about before. I decided last week, that I would trash that project to work on my colleagues compositing film, by animating her Elephant. I am now animating a shot for her, as well as doing an Elephant walk. I've also been trying to update my Tiny rig animation, although it is still not finished.

Taking a short break from some of the game animation I have been doing, I've been working on (or at least trying...grr) on the second half of my personal project, which is another composited piece with the dinosaur rig I used in Specialist Animation 2!

My plan for this 10 second sequence is to animate the dinosaur chasing my friend across the screen, and knocking him over. I was excited about the awesomeness of this idea, but I have had such problems camera tracking this footage since Major Project begun, it's almost killed me. Initially I used the same tracking software we used in Specialist Animation 2, which was Boujou. However, for some reason Boujou would only track my sequence into multiple camera solves, instead of just 1, which I could not use. So, my tutor suggested I use PFTrack, which is the program the VFX students use at our uni. Long sotyr short, it eventually worked in PFTrack, but I couldn't line up the 3D scene in Maya, so half-way through emailing my tutor that it was impossible, I tried Boujou again, and....It freaking worked. GUH.

I'm still having to try to a little guesswork to get it to line up, but at least I have something to work with now, yay!

Here is the filmed sequence the dinosaur will be placed in:

And this is the rough animatic I did in Pre-Production that I never showed, to show the rough placement of where the dinosaur will be.

So, far the past week I've just been working on the animations shown, (although not much difference yet) and also beginning to block out and sort the cameras out for the dragon cinematic, for the game. Asides from this, I've also been trying out poses for the dragon's death, although...Not going so well so far. Oh well, here's some screen previews for now. 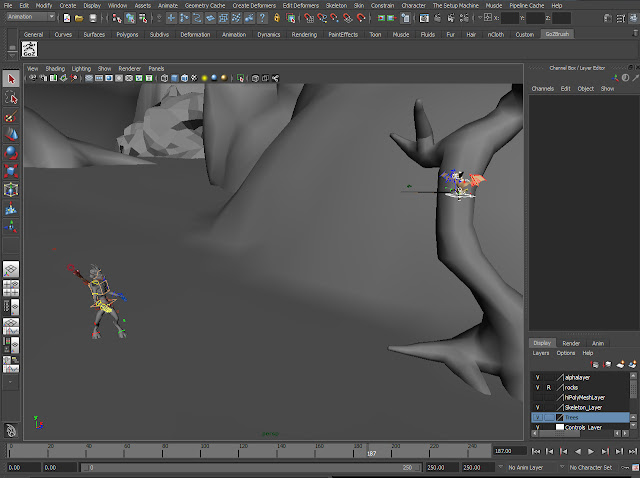 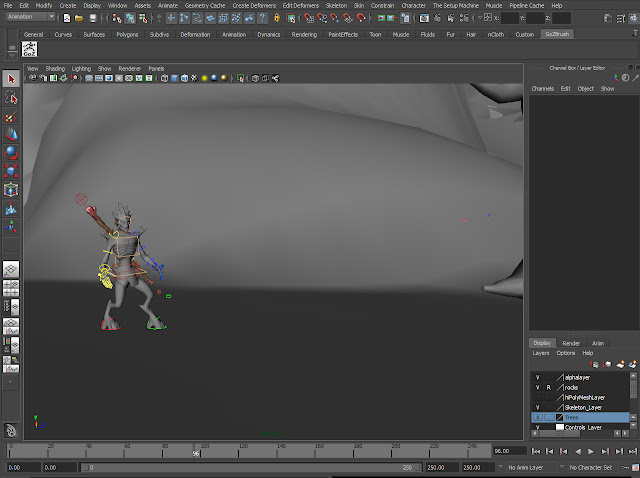 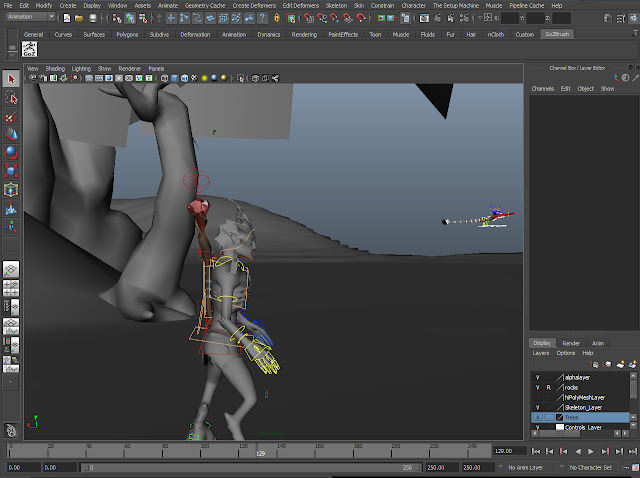 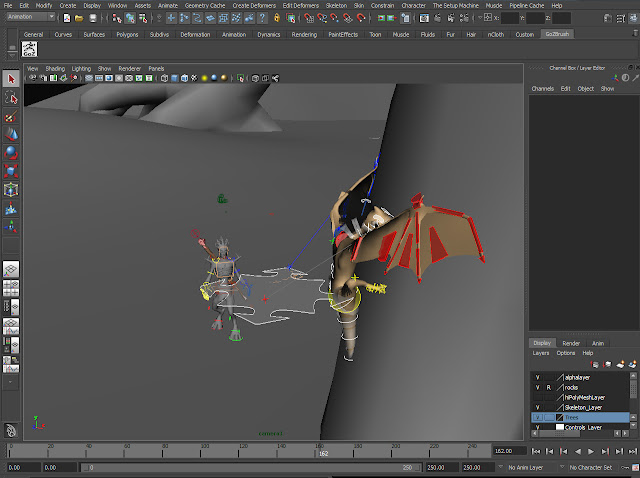 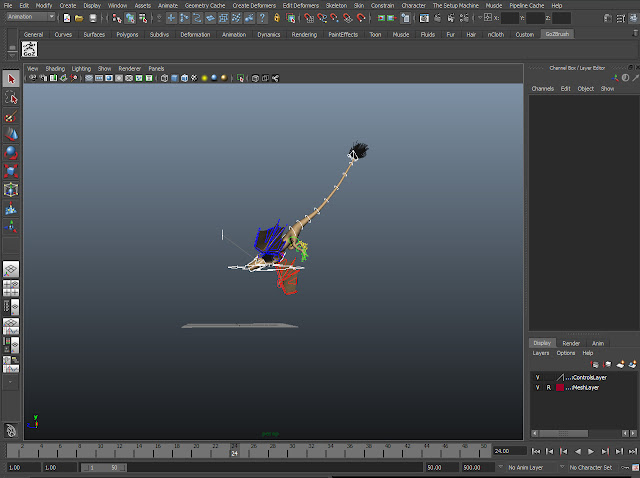 Not much has happened this week asides from continuing on with the animations I have started. I've updated the Dragon and Centaur animations, as well as posting a couple of new Fae animations! (The main character for our game).


I changed the dragon's flight cycle a little from last time, re-animating him to be more more erratic like a bat, due to his small size. The dragon bite swoop has also been improved on, but still needs a lot of work!

So it's time for another update! At the moment I am just continuing with in-game animation, as before. This week I begun to do the Centaur Walk Forward animation for the game. It's still only being blocked out at this stage, but I have been concentrating on getting the feet poses right. This is it's progress so far, however still needs a lot of working on over the coming weeks.


I've also been working more on the Dragon's bite animation this week, improving from the last video I posted. After pondering it over and discussing it with my tutor, I decided to was bes to change the animation, so that the dragon would do a swooping bite, instead of just a rear back and bite. This proved to be a bit easier to animate, and it always looked better balance and motion wise, too.
This is the animation roughed out so far. Will be working into it more in the coming weeks.

Continuing on with some in-game animation, I begun to use my rig for the Bark Basher a couple of days ago to begin animating the in-game walk forward for the Bark Basher. It's going good, however there are still many tweaks to make and smoothing to do!

I've also been trying to rough out the animation for the dragon's in-game bite attack, however it's been a bit of a struggle trying to get the poses and the balance right. It's not animated yet, so it's just a rough out, but this is the anticipation for the bite so far..

I'm still not liking the look of it. Will have to keep trying until I get the base animation right. I will keep hacking at it in the coming week!
Posted by Hollie at 23:09 0 comments 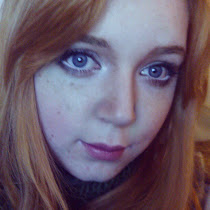 Hi there! My name's Hollie, and I'm a short Computer Animation student from the University of Glamorgan. I specialise in CG Animation and am also an aspiring Concept Artist. I adore games, watching paranormal programs, reptiles & newts. As well as dogs. They're amazing.
Thank you for visiting!